Fancy connecting with over a century of British stage and television history? Channelling people connected with everything from pantomimes to House of Cards? Just walk up the main staircase to the landing below the Morris Space and sit down on one of numbered fold-down seats there.

The seats are from the Watford Palace Theatre, which opened in December 1908 and is now a Grade II listed building. The original 1,000-seat theatre was a commercial venture specializing in music hall, pantomime and comedies. As the decades passed, it had several renovations, notably when it was restored to its original Edwardian glory in 1981. (A more detailed history can be found on the invaluable Arthur Lloyd theatre history website).

From Watford to Finsbury Park

In 2004 the Palace began its most recent refurbishment under a substantial Arts Council grant. This is where the seats become part of Park Theatre’s history. Jez Bond – even then planning to build a new theatre – was doing a residency at the Palace under the Regional Theatre Young Director Scheme, directing J.B. Priestley’s I Have Been Here Before.

“They were ripping the old seats out of the auditorium,” he remembers, “selling some of them and giving more away. The manager said to help myself, so I borrowed a van and took away as many as would fit. A friend let me store them in his garage.”

As Park Theatre approached completion, Jez found space for 20 of the old Palace seats, which he had reupholstered in faux leather. Six are on main staircase, four in the café itself, and ten others are scattered in other parts of the building.

From Dixon to Dad’s Army

Many of the seat backs have small plaques naming people who had "adopted" them. The ones it was possible to photograph (in some cases by sticking a smartphone down narrow spaces behind the seats and clicking blindly) reveal some illustrious names. As well as a former director of the Watford Football Club and several prominent local businesses, they include the following.

Tristan Garel-Jones – now Baron Garel-Jones of Watford – was the Conservative MP for Watford from 1979 to 1997. As one of the Whips who keep Parliamentary parties in line (“seen as a mixture of Machiavelli and Ivan the Terrible by the Thatcherite right-wing” according to the Independent), he is thought to be the inspiration for the wily Francis Urquhart in the BBC’s House of Cards television series.

Maggie Guess is an actress, known for television work such as Birds of a Feather in the 1980s, and more recently the Inspector Lynley Mysteries.

Vere Lorrimer (1920-1998) was a British television producer and director. He directed many BBC dramas including the original British police drama series Dixon of Dock Green, which premiered in 1955, to the “space opera” Blake's 7.

The most important in terms of the Watford Palace itself are Gilda and Jimmy Perry. Both were actors – Gilda was also a dancer and choreographer – who worked around the UK in repertory companies before moving into television. As well as her stage work, Gilda acted in such television comedies as Are You Being Served? and The Last of the Summer Wine. Watford-born Jimmy became famous for co-writing classic BBC sitcoms like Dad's Army and It Ain’t Half Hot Mum in the 1960s and 70s, both inspired by his time in uniform. Between 1956 and 1964, Jimmy was actor-manager at the Palace Theatre in Watford. Even after their move to television, the Perrys returned to the Palace for many years to do pantomimes at Christmas.

There may be more plaques, but we’ll need to move the seats to be sure. And rumour has it some may go on sale soon... 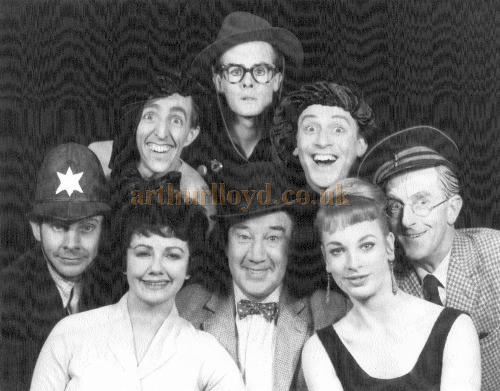